Use NDI® technology in Microsoft Teams on individual meeting basis

Microsoft Teams meetings began supporting integration with NewTek NDI® (Network Device Interface) in September (MC218745). We are now updating NDI for Microsoft Teams so that authorized users can enable NDI® on a per meeting basis.

Note: If you do not use NDI® in your tenant, you can safely ignore this message.

This message is associated with Microsoft 365 Roadmap ID 68836

When this will happen

How this will affect your organization

NDI® provides a way to convert a meeting participant’s feed into a discrete, individual video source that can be managed in video production tools for broadcasts. NDI® technology is limited to a local network and should only be considered a part of the production workflow, not a broadcast solution.

This feature works in all version of the Teams apps.

Once in a meeting, anyone you have authorized can broadcast a specific meeting by modifying the setting in client Settings for that meeting.

When a user joins a meeting, they’ll see a message that notifies them that the meeting is being broadcast. If users don’t want to be included in the broadcast, they’ll need to drop from the meeting.

The following image shows the banner message that a user sees in a Teams meeting.
What you need to do to prepare

NDI® for Teams is off by default for all tenants. If you have already enabled NDI® for your tenant, this change only affects users of NDI® at the individual client level.

You have two steps to authorize access to this service: 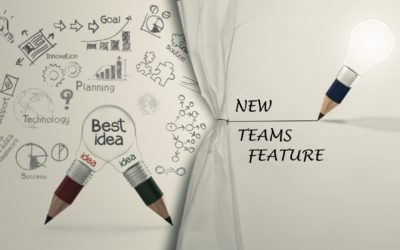 From Microsoft CorporationTechnical Bulletin:  MC277112 · Published Aug 10, 2021 Message Summary Introducing background effects on web. If you want to change what appears behind you in your video meeting or call, you can either blur...